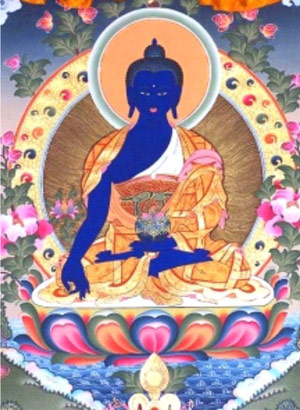 As the outside world eagerly looks for a cancer cure, Tibetan medical doctors in the Indian sub-continent diagnose and treat cancer patients every day. The Legacy of Menla is a fresh portrayal of cancer, from the perspective of Tibetan Medicine.

The Legacy of Menla is named for Sangye Menla, the Buddha of Medicine in the Tibetan Cosmology. Legend says that the foundations of the Tibetan Medical system – its theories and curing methods – were expounded by Sangye Menla.

This body of precious medical knowledge, assert Tibetan doctors, is still relevant in curing and managing modern diseases, such as cancer, and bringing health and happiness to all. Up to now, Sangye Menla is still revered as the source of inspiration for doctors and for the health workers.

The film follows Dr. Dorjee Rapten Neshar, in his practice, as he treats patients, and includes interviews with people who have been cured of cancer through his treatment.

Dr. Dorjee is the Chief Medical Officer of the Tibetan Medical and Astrological Institute, Bangalore, India, and is well known in the world for his experience in treating and managing cancer through Tibetan Medicine.

The film aims to bring a responsible view to its audience. It does not dismiss modern medicine, and does not position Tibetan Medicine as the “next miracle cure” for cancer. Yet, it aims to provides enough insight into the mind-body connection and the effectiveness of Tibetan Medicine to evoke the viewers’ curiosity.

Excerpts from an interview with the filmmakers

Alex Co, in a private interview with Cancer Awakens, shared an interesting personal experience during filming this documentary.

He said, “Adrian, my co-producer tried the Tibetan way of pulse diagnosis. Just by checking the Adrian’s pulse, the doctor confirmed that his breathing was constricted (tight chest).

Moreover, the doctor could “feel” that Adrian is “thinking too much” and advised him to mentally relax. I laughed at the peculiar remark, and asked if it is possible to tell what kind of thoughts bother Adrian.

The doctor was accurate enough to say that the nature of the thoughts are “about the future” and “competition”. Adrian was indeed worried about those especially during those days of our filming. That convinced us that the mind is intricately connected with the body (it is even “visible” from a person’s pulse), which is a very central tenet of Tibetan Medicine from the beginning.

Cancer Awakens also asked Alex if the documentary changed his views on cancer treatment in any way. His answer was interesting.

“Before (the documentary), I thought that Tibetan Medicine rarely treats cancer and other “big” diseases. After this experience, I discovered there have been numerous people who have gone to Tibetan doctors to be treated. It was much more common than I first thought.”

Lessons from the movie

Filmmakers Alex Co and his co-producer, Adrian Szaki, are from St. Andrew’s University, Scotland. They are curious about people like Dr Dorjee who take a unique path in life, and make films that open their viewers to diverse world views.

They have also made the full-length film, Daughters of Dolma, about modern-day Tibetan Buddhist Nuns. www.facebook.com/daughtersofdolma