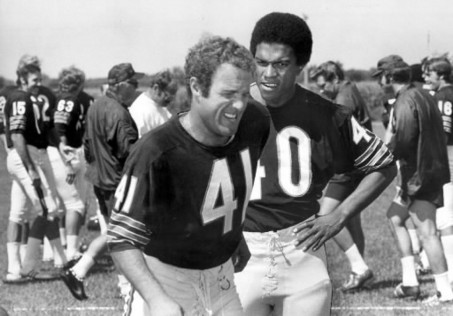 Brian Piccolo and Gale Sayers start of as rivals and slowly they become friends. Their friendhip grows deeper when Brian is suffering from cancer and Sayers stands by his side. Let us explore some important life lessons from the movie Brian’s Song.

An adaptation of the autobiography of Gale Sayers (I am third) and a remake of a television film (1971), this movie is a heart-wrenching story of two great friends: Brian Piccolo (played by Sean Maher) and Gale Sayers (played by Mekhi Phifer) who actually started off as rivals.

Sayers, being African-American, did not get the warm welcome into the football team that he expected. However his brilliant performances meant that Piccolo and he were vying for the same place in the team. In order to reduce the tension between the two men, their coach makes them roommates, which raises controversies but eventually brings them closer.

Brian Piccolo was an arrogant, wise-cracking and fun-loving handsome rookie whereas; Gale Sayers was a driven, serious athlete and a natural footballer on the field. Their distinct personalities are portrayed brilliantly. The way their friendship blossoms – despite all their differences – is the highlight of the movie.

This process begins tentatively, when they learn to respect each other as players. The become great friends when Sayers suffers a serious knee injury and almost gives up his career. Piccolo stands by him in his hour of need and makes getting Sayers back in the game his sole mission.

After his rehabilitation, Sayers returns to the game with a bang and instantly becomes a star. But then, their worlds are turned upside down when Piccolo is struck down with cancer. Every treatment is tried but they all fail, ultimately leading to his death.

Throughout Piccolo’s painful journey, Sayers helps him immensely and their friendship grows deeper than before. Brian battles cancer in the bravest way and Sayers supports him unyieldingly. (Don’t be surprised if even the toughest viewer sheds a tear or two!)

Life lessons from the film

The movies is a perfect blend of light humor, warmth, depth and gnawing emotion. The director (John Gray) has done a superb job of bringing out just the right level of emotion and reactions in every scene. All the actors have given power-packed performances and fit their roles very well. With perfect pace and effective dialogues, even Michael Legrand’s theme song The Hands of Time adds to the emotional intensity.

For me, Brian’s song is a real masterpiece; even as it took me on an emotional roller-coaster ride, it opened a lot of windows in my mind that I never knew existed.

This article was contributed by Vamsi Krishna, a student of Advertising at EMDI, Mumbai.