Terry Fox’s thriver story is an inspiration for cancer patient. When the baseball champ was diagnosed with cancer, he was told that his leg had to be amputated and even then the chances of his survival was extremely low. Let’s see how Terry Fox kept his hope alive abd in the process ignited the hopes of others through his iconic ‘Terry Fox Run’.

Terry Fox, born on July 28, 1958, was an enthusiastic athlete. His passion was basketball. Fox sought to make his school team in the 8th Grade, but his physical education teacher felt he was better suited to be a distance runner. Though he wasn’t all for the sport, he took it up to please his coach.

He continued playing basketball and became a regular player in 9th Grade and earned a starting position in 10th grade. The Terry Fox Cancer story begins after grade 12 when Terry won his high school’s athlete of the year award. Fox was a distance runner and basketball player for his High School and University. 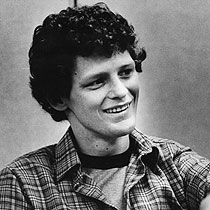 On November 12, 1976, as 18-year old Fox was driving home, he became distracted by nearby bridge construction, and crashed into the back of a pickup truck. Fox emerged with only a sore right knee which he ignored.

He again felt pain in December, but chose to ignore it until the end of basketball season. But by March 1977, the pain had intensified and he finally went to a hospital, where he was diagnosed with osteosarcoma.

Terry Fox, a normal person like you and me is an icon of inspiration. He was a lively, cheerful person who dedicated his life to his sports. In 1977, when Fox was diagnosed with cancer, he was told that his leg had to be amputated, he would require chemotherapy, and that recent medical advances meant he had only a 50 percent chance of survival.

With an extremely positive attitude; Fox was walking within 3 weeks of his amputation with an artificial leg. Fox’s attitude towards cancer helped a lot in his recovery. He endured sixteen months of chemotherapy and ended his treatment with new purpose.

Rather than simply battle depression, Fox decided to run his own cross-country marathon and raise money and awareness for cancer research. On October 15, 1979, Fox sent a letter to the Canadian Cancer Society in which he told them his goal and appealed for funding.  He told them about his own experience and why he wanted to do this. 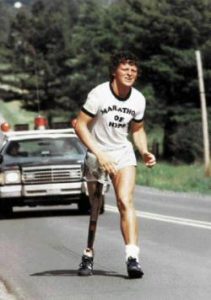 Fox started at the Atlantic Ocean off Newfoundland, with only a few supporters and very little fanfare. No one paid much attention to Fox as he moved slowly through Quebec, but by the time he reached Ontario, the Canadians start to notice his heroic effort. Fox was suddenly forced into the limelight, for the first time in his 21 years.

About half-way through his now well-publicized journey of 143 days and 5,373 kilometers, the spread of his cancer eventually forced him to end his and ultimately cost him his life though his efforts had a lasting worldwide effect on the public.

Terry Fox is considered a national hero and is every patient’s icon of inspiration. The Terry Fox Cancer Story is truly inspirational.