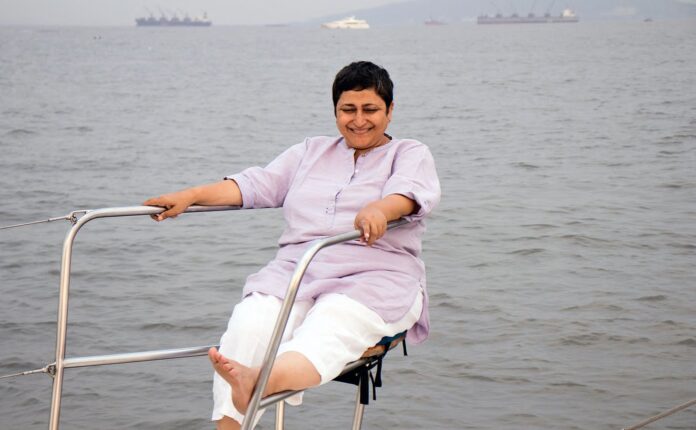 For most people, cancer is the end of the road. But for Anju Kurien, Breast Cancer Thriver and Cancer Awakens Sherpa, cancer was the start of a new journey. This is how she steered away from self-pity towards a positive journey, in part 1 of this 2-part series. 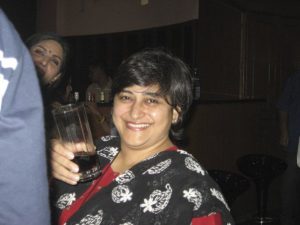 It was 6 pm on Oct. 13, 2011. Anju Kurien had been busy making elaborate arrangements for her husband, Kurien Mathews’ 48th birthday. As usual and as they had done for years, she had invited 20 odd couples – their friends home for dinner.

The doorbell rang and no, it wasn’t an early guest. It was the biopsy test results. A few months back, Anju had discovered a lump in her left breast. As the lump was on the inner side, it took her a while to realise it was there. She ignored it for a another month or two, until one day, Kurien told her,

So off they went to the hospital they usually go to in Bandra, Mumbai – the Holy Family Hospital, and met a General Surgeon. He examined her and recommended an FNAC tested which turned out negative. Anju duly reported this to her sister, who is also a doctor herself, as is her husband (at Sajdarjung and AIIMS respectively).

Anju’s sister was rightly upset about our decision to go to a General Surgeon, and immediately fixed an appointment with an oncologist surgeon, one who specialised in breast surgery and reconstruction. The oncologist insisted on a further biopsy. The diagnosis confirmed their worst fears, Anju had breast cancer.

A New Journey with a New Companion: Cancer

With this new discovery in hand, and somewhat absorbed, it was time for the dinner guests to arrive for Kurien’s birthday party. He suggested, “let’s cancel it”, so that they could come to terms with the enormity of the news, and figure out how to deal with it. But Anju said quietly and firmly,

“No. We can do that tomorrow. Let things go ahead as normal today.”

That set the tone for how this breast cancer thriver would deal with the daunting cancer challenge over the next 18 – 24 months.

When they went back to the oncologist, he advised a full-body test instead of just the breast examinations. As it turned out, this was a really good advice. They discovered that the cancer actually spread to her liver. And if they went ahead with the breast surgery without being aware of the other complications, things could have gotten much worse.

She still remembers how her sister, Ameeta – herself a doctor – was in deep despair on learning about the cancer’s spread to the liver. Anju had hardly seen her sister react that way before.

Introducing Cancer to the Family 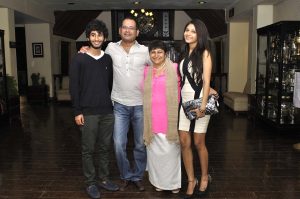 Cancer was the unwanted guest but now that it had entered their life, Anju made a conscious effort to accept it. She also made sure that her family knew this new entrant pretty well.

“What have I done with myself! How can I let my family down? The kids are still young, how can I leave them.”

For the first few months, she tried to erase the memory of the cancer. Perhaps it was denial, but she didn’t want to know much about it. She thought,

“I still feel fine. It will pass. How can I have cancer, a cancer patient doesn’t look like me”.

Kurien, on the other hand, encouraged her to take things head on, clinically. He recounts,

“After the initial prognosis which was not very encouraging and the trauma of an uncertain future, we decided not to get into moping or the ‘why us’ feeling, instead we addressed it with total transparency with all our family, friends and just about anyone who asked. We decided to deep-dive into learning everything there was to know about breast cancer that had spread to the liver. We learnt about drugs, side effects, caregiver responsibilities, surgeries, dealing with emotional and physical pain, the works.”

“I was in boarding school, in the 10th grade. I have a distinct memory of the first time  I learned about the initial tests. After which I remember Mama telling me that she was diagnosed with cancer; I was by the basketball court. It definitely shook me up. It is one of those moments in life where you stop and think about what is really happening. I wanted to be home as much as I could and be there for my mother, father and sister, to deal with it as a family. I’m just glad that my parents shared this information with me from the very beginning.”

“Everything felt like a blur for the first week, like time had just stopped. What I do remember very clearly is my mother consoling the rest of us  and letting us know that it would be okay.” 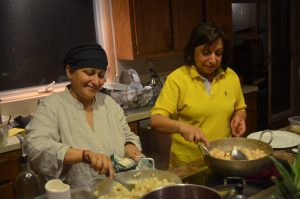 Anju dealt with the surgery pretty well. That Kurien encouraged her to see cancer in a positive light did really help. But the chemotherapy proved to be a huge challenge. Her skin became pale and dark at the same time.

“It shocked me initially. Somehow I never felt low; angry at myself. yes. I think the support I received from family and friends just kept me afloat.”

She turned to a vegan diet after the cancer diagnosis, but after chemotherapy she lost her sense of taste and whatever she ate seemed tasteless. She also started losing her hair. That’s when she decided to go bald. She sported head scarves and didn’t shy away from going out and interacting with people.

“Everything that came with the cancer, she owned and wore with pride as she fought it – be it rocking the head-scarves or prepping for chemo sessions with yoga techniques … all the while continuing to work, travel around the world, and more.”

“The way my mother approached cancer definitely affected the way I had thought about it. I can only describe her positive and strong attitude as infectious. She showed me that things affect you only if you let them.”